On The Go Map

1. The Historical Centre of Daugavpils City

26. Ruins of the Dinaburg Castle and Castle Model

The cycle route Nr. 35 is a travel itinerary that includes a visit to major architecture monuments of Daugavpils and Krāslava cities such as churches, castles and a fortress, as well as the landscape of one of the most astonishing bends of the Daugava River. All these can be admired when you ride a bicycle along both banks of Daugava River where Nature Park “Daugavas Loki” is established. This park is included into the Latvian National UNESCO World Heritage List.

During the journey you will be able to visit two hundred years old Daugavpils Fortress, the ruins of the Dinaburg Castle, a unique nature site – “Gate of River Daugava”, which is located between the scarps of banks in Slutišķi and in Ververi (by the way, there are some resting places), the Slutišķi Village and Old Believers Rural Courtyard, Castle complex of Counts Platers, plenty of museums, as well three sightseeing towers (in Vasargelišķi, Priedaine and Lazdukalni). There are a lot of guest houses and camping sites available in Daugavpils and Krāslava cities, as well as the surrounding area. Also, you can savour horse ridings, boat trips and raft rides on the both river’s banks. The full length of the route is 122.8 km.

Scenic, visual and informative route is very various. While travelling around this route, you will have an opportunity to get acquainted with Latvian, Russian and Polish cultural and historical heritage, with the most popular sightseeing places and with the daily life of the local community. The route gets across the landscape area of Augšdaugava, which is a specially protected area. There are lots of inquiry paths and parks next to the cycle route.
This route is marked with the special road signs, which are set at the crossroads and on turnings. Informative stands and maps are also included into the route. 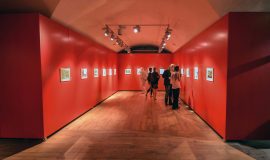