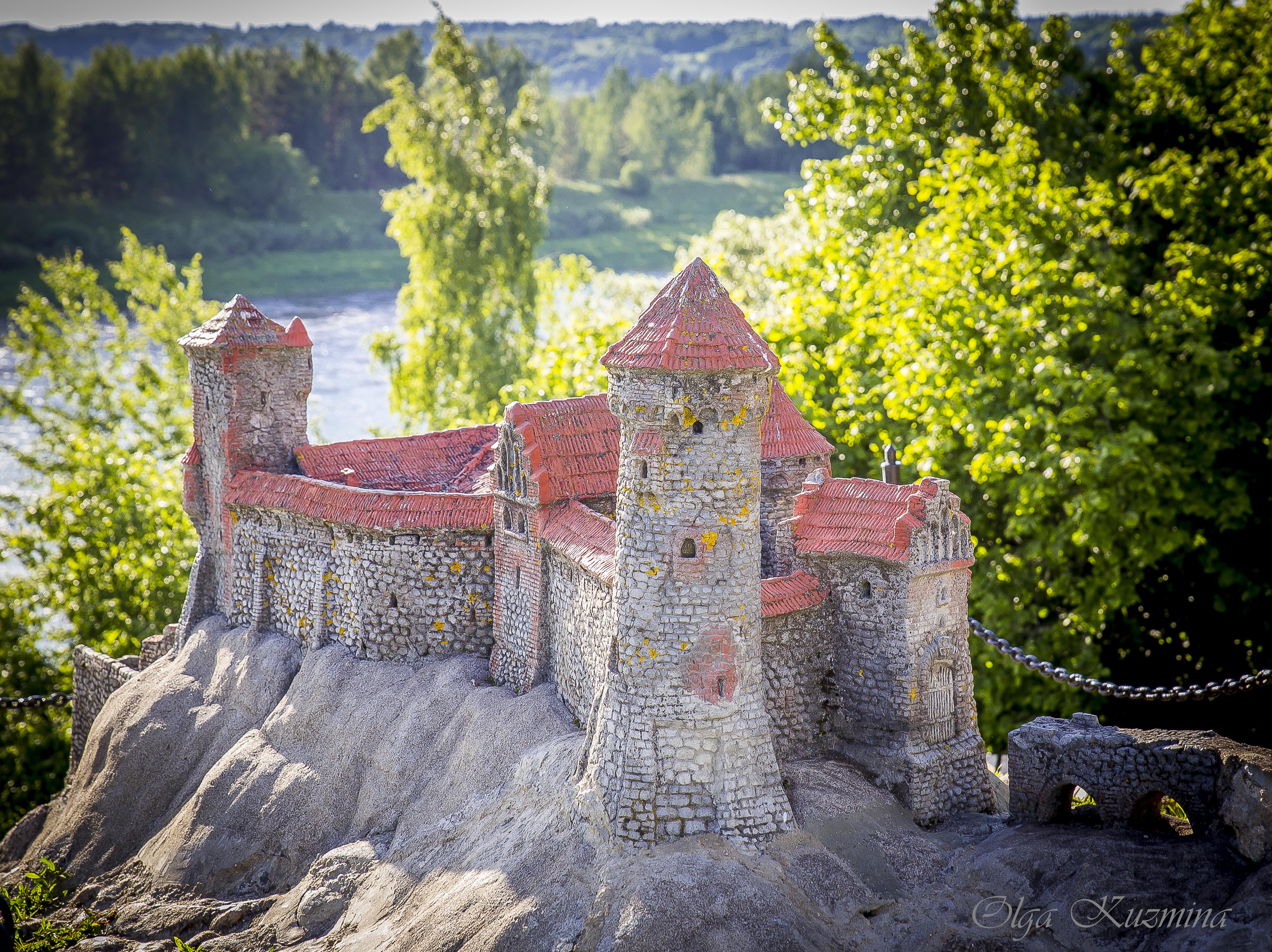 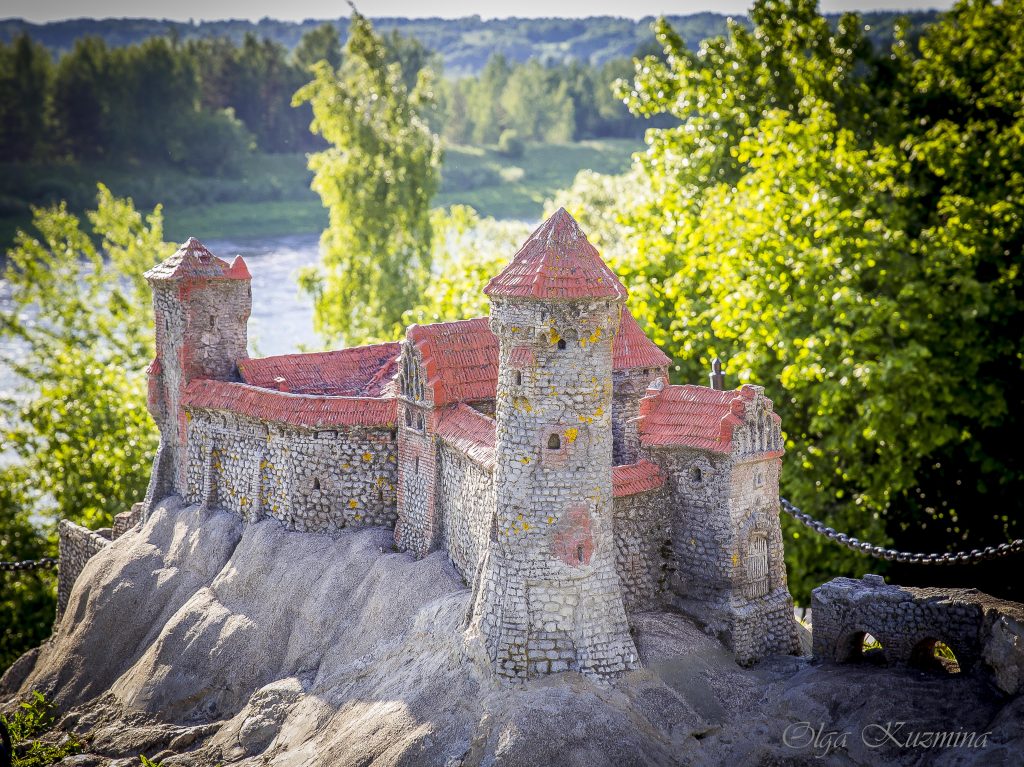 The Naujene mound, which was inhabited since the 8th century, is considered the founding site of Daugavpils. In 1275, instead of the Naujene mound, the castle of Dinaburg, as a border fortress facing Lithuania, was built by the Livonian Orden Master Ernest von Racenburg. Almost immediately after the castle was built, it was surrounded by Lithuanian troops under the leadership of King Troiden. Nowadays only ruins of the castle remained, but there is a stone model of this castle on the mound, and historical exposition about the castle in Naujene local history museum.

This excursion introduces Vecpils Hillfort – the place where Dinaburg (Daugavpils) was founded; it is possible to walk by the nature path to the ruins and the model of the Dinaburg Castle, after the excursion – have a rest on the “Knights’ Glide” (“Bruņinieku laukums”) – equipped outdoor rest place.
Guide services – 7.00 € for a group from 1 to 35 persons

From the history of Dinaburg Castle:

In 1275, the Dinaburg castle was built by Ernest von Raceburg, the Livonian Order Master, in the place of Nauene castle mound as a border fortress to protect against Lithuania. As soon as the castle was built it was surrounded by the Lithuanian army under the leadership of king Troiden.

In the 13th century the area inhabited by Latgallians included also the current south-east part of Latgale, which was the property of the Order since 1264. Regions inhabited by the Selonians on the west bank of the River Daugava stretched to Nauene, which was on the right bank of the River Daugava that was mentioned in the document dated 1259 as the farthest eastern point of the border of the Selonians’ land.  One of the three main crossing points of the Daugava River was near Naujene (the other two were near Selpils and Dole Island) which were used by Lithuanians in order to invade Vidzeme. In this place (near the Lithuanian border) the Livonian Order decided to build the Dinaburg castle. The evidence to this can be found in the travel description written by Chillebert de Lannua in 1413, “From Koknese I went up the Libyan river (Daugava) with my sledge and reached a castle owned by the Livonian masters and called Daugavpils, which is the last castle they own on the Lithuanian border.”

In 1888, the first excavations were conducted under the guidance of V. Neimans. As a result, they discovered ancient foundations of the castle covered by 7-9 feet of ruins and rubbish. From 1811 to 1829 castle ruins were intensively used as a building material, by the time of the first excavations the upper part of the castle wall had already been destroyed – the stones and bricks had been broken out and taken to Daugavpils for the construction of the new fortress. Despite the brutal destructions, enough information was obtained to get a clear picture about the size and the layout of the castle.

The castle building was approximately 59 m long at its largest place and approximately 26 m wide at its widest place (on the west). Very large bricks (dimensions 30 x 14 x 10 cm), stones (mainly for foundations) and limestone plates were used as a construction material. The entrance to the Dinaburg castle was on the east through 2 front castles which were surrounded by stone walls and ditches. They could be easily dammed up and filled with water and thus it was harder to force them. The castle could be entered by crossing a drawbridge through the gate protected by special towers. The oldest (eastern) wing of the castle was likely built when Ernest von Raceburg was the Livonian Order Master, while the northern and the western wings were likely built around 1313 when Master Gerhard von Jorke restored the castle and Master Gosvin von Herike built 4 towers in 1347. Only two tower places – in the SE and SW corners – were certainly found during excavations. It might also be possible that the Master Gosvin von Herike also fortified front castles with tower-like constructions. Three cellar rooms were located in the eastern wing of the castle. The entrance building of the castle comprised a castle chapel, which had been accurately built with colourful profiled vault ribs, door and window edges, on the second floor. The hall of chapter of priests was in the northern wing, next to the chapel, while the meeting and dining room was in the western. The western wing on the Daugava side also comprised living rooms of the manager. There were kitchens, stores, heated rooms and dormitory of the Order brothers (bedrooms) under the mentioned rooms. A wide courtyard was in the southern part of the castle. All buildings of the castle were surrounded by a thick masonry wall, near which in the southern part was either a narrow wooden building or a breastwork support building.