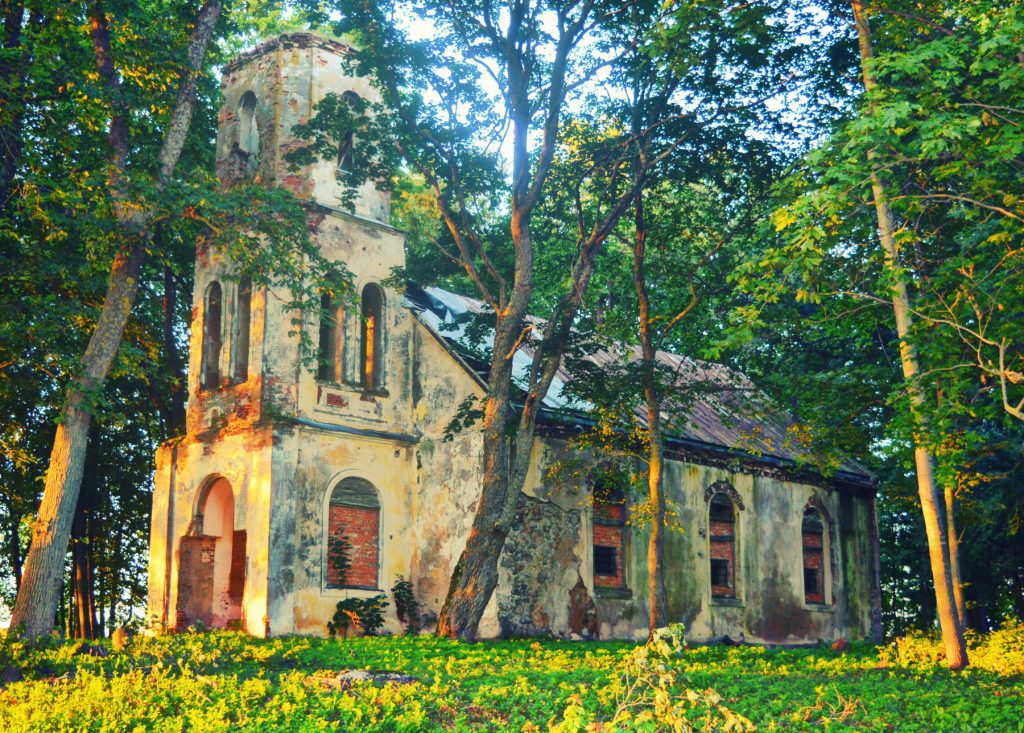 The church was built in Vilkumiests by landlord A.Oettingen in 1823. In 1863 the church’s tower was built. During World War I it was destroyed, and during World War II – absolutely vandalized.

History of the Church:
Egyptian evangelic Lutheran parish was established in 28 February 1567 by the order of duke of Kurzeme. Approximately in 1584 Egyptian parish already had its own pastor. Around the turn of the 16th and 17th centuries near the church there appeared a hamlet that was called Vilkumiests. Vilkumiests is also the real Latvian name of the parish. Egyptian parish had several widen churches, the last of which was destroyed in 1812 during the French War.
The landlord of Kalkune and Medni (Medums) manor in 1823 started to build stone church that was consecrated in 5 July 1825. In 1863 A.Oettingen did complete renovation of the church and built a tower. Simultaneously with the establishment of Egyptian parish the landlord of Medņi manor W.Fürstenberg established a pastorate that suffered much during the wars, because it was situated on the roadside of Daugavpils. During the French War and especially World War I the archive of the parish was totally destroyed.
After World War I, in 1930, Egyptian church was restored. It had seating capacity for 80 people. In the possession of the parish there were 54 hectares of pastorate land. In 1936 Egyptian parish had 50 members, were christened 3 children, one youth was confirmed. Incomes of the parish made 1988.86 lats, expenses – 1231.11 lats. It is known that on the coat of arms of Egypt-Birkeneļi Lutheran church was illustrated the Pyramid of Cheops, whereas usually on such coat of arms were illustrated crosses or other religion symbols.
During World War II in 1944 the tower of Egyptian church was shot by canon because at that time in the tower was located fire lookout. The church was totally destroyed. After World War II chaplain Nikolajs Muiznieks from Daugavpils conducted the services both in destroyed church and in church attendant’s local house, which now is demolished. But very soon due to the small number of the parish members governmental authorities prohibited to conduct services both in Egypt’s church and in the parish. Wherewithal Egyptian parish was closed and the few parish members joined Birkeneļi parish, but after Birkeneļi parish being closed all the members joined Daugavpils evangelic Lutheran church. After Egyptian church closure in the building was located kolkhoz’s chaff flour mill that was operated with the electricity. Around 1979 milling was stopped and the mill was dismantled. At this time the church is unused, empty and pitiful. The doors are broken out. Egyptian evangelic Lutheran graveyard that is located around the church is abandoned and overgrown. All the tombstones of the unknown bodies were brought away. Only some graves are in order. Last funeral in Egyptian graveyard was in 6 March 1980. This was the funeral of Sofija Vainags. In the Egyptian graveyard also is a grave of Oskars Svensons, the teacher of Rainis.