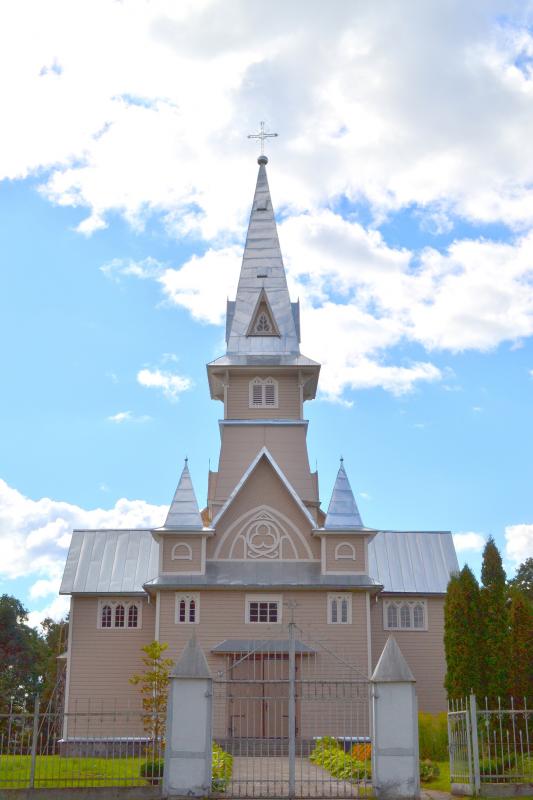 Present-day wooden building of Silene Roman Catholic Church was built in 1913, in time of dean Mikelis Skorupskis, not far from the burnt down chapel that was built in 19th century. Silene Church is one of the largest wooden churches in Riga’s Metropolis and the largest in Jelgava diocese. It has a cruciform shape. The church has one large tower and several smaller gazeboes.

History of the church:
In Silene (Barkovka) there was old wooden chapel that was built in 19th century. In almanac of Telsiai diocese of 1911 it was mentioned as affiliate of Elerne where lived priest Peteris Purovskis. This chapel burned down. According to the remaining foundation the church was 14m long and 6m wide. Now on these foundation is built small hut and it is situated approximately 50m from the church. The chapel was devoted to St. John the Baptist.
Present-day Silene wooden church was built by Mikelis Skorupskis. He was vicar in Elerne. In Silene he bought a piece of land and gave it to Lapinskis. Lapinskis helped the church a lot. After the death he was buried in parish cemetery and on his tombstone there is an inscription which says that he had been the benefactor of the church. Priest M.Skorupskis from Elerne in 1913 built wooden church in Silene at his own expenses. The year of its building is inscribed on foundation near the presbytery.

Description of the church:
Silene Church is one of the largest wooden churches in Riga’s Metropolis – it is 24m long, 14m wide and 12m high. From the outside it is planked and coloured. The roof is covered with galvanized plate-tin. Above the roof there is one tower and several smaller gazeboes. The church was built in cruciform shape and is very specific and beautiful. It has entrances from the front, from sides and from the sacristy. There are a lot of big windows. It has wooden floor and wooden sloping covered ceiling. In the middle the ceiling is high, but from the sides – lower. The walls are propped by 4 bundle beams that have peculiar woodcut. The ceiling is propped on 4 wooden planked pillars. The walls also are planked, but are not coloured. In the church there are 3 altars. Big altar is made of oak and has painting of painter Bitkovs. On left side altar there is a painting of St. Joseph painted by the same painter. Right side altar has the painting of Jesus’ Heart painted by Glaudans. All 3 altars were made in time of dean M.Klaviņs. The church is separated from the presbytery by God table. There are two sacristies: on the left side there is a vestry, on the right side – storehouse with different church accessories and tools. Choral rooms are propped on wooden pillars. There is only a harmonium. On both sides above the choirs there are 2 rooms for participants of pageants. Below, near the entrance on both sides there are dark rooms for Christmas Bethlehem and Holy Week’s services. In the parish there are two cemeteries.