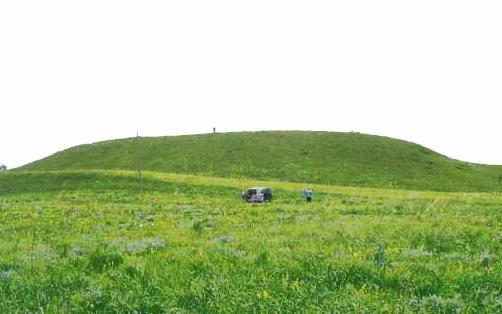 It is a new-opened mound (1998) and is located near Belarus border. It is visually impressive and well-preserved. The flick ceramics is found in the cultural layer. It was inhabited from the end of the first millennium BC till the middle of the first millennium AD. Robeznieki Mound with the settlement is a National Сultural Monument.

On May 25 in 1998, the State Administration of Cultural Heritage Expedition while visiting the archaeological monuments in Daugavpils region, discovered a mound, which was previously unknown to scientists. It is a mountain, about 15 m high, where trees do not grow, with a broad, evened area, with artistically formed descents and with the pronounced mound silhouette. The mound is not damaged, though, probably before WWII it had been destroyed. The cultural layer was found not only at the top of the mound itself, but also at its foot, and judging by the dish fragments that were found there, the mound dates to the first half of the first millennium BC till the first half of the first millennium AD.
The mound has connections with a widespread and ancient Baltic typical flick ceramic culture of Latvia, Lithuania and Belarus, that is characterized by its forming without potter’s wheel and with dish that was worked up with the help of plant mops.