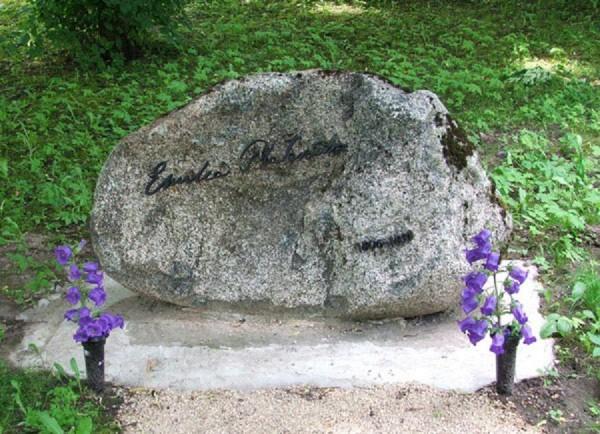 The memorial sign is located in Liksna Trails, in the beginning of Emilia Plater path. Emilia Plater (1806 Vilnius – 1831 Kapchiamiestis) is Poland and Lithuanian national hero, who lived in Liksna estate since 1815. She led a patriot combat unit in Latgale and Lithuania, preparing to attack Daugavpils fortress; she died relatively early during the time of Polish uprising in the winter of 1831.

The countess lived in Liksna from 1815 till 1829. The girl did not make a secret of her patriotic feelings. She joined her people fearlessly also in the Polish rebellion or in the time of uprising, which happened in 1830-1831. On March 23 in 1830 she took part in the divine service in Duset (Lithuania) church and then called the compatriots to the fight “with a sword and loose hair”. After the crash of Polish and Tsar’s army at Pristaine, the countess joined Polish fighters section, and there, Emilia Plater set up her own section. Later, the courageous countess was nominated as a commander of the 1st company of the 25th Lithuania’s Infantry Regiment.

In the memories of Polish fighters, you can read that Emilia Plater was a great military leader. Unfortunately, the Polish fighters suffered a defeat near Vilnius on July 6 in 1830 and Emilia Plater had to escape to Warsaw. In that period, the countess became seriously ill and died in the same year on December 31 at the age of 25.

Poles assimilated Emilia Plater in fiction and art to the famous French Jeanne D’Arc. In Poland, streets, railway stations, schools etc. are named after her name. A portrait of Emilia Plater made by artist Sandis Greishkalns is stored in the library of Liksna parish.