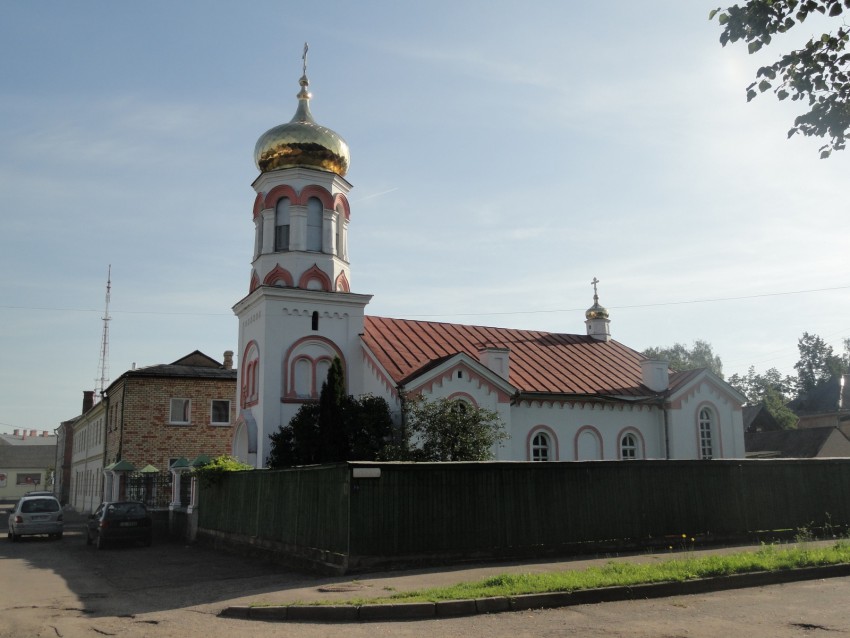 Old-believer’s Prayer House of The Annunciation of the Most Holy Mother of God and Nicholas the Wonderwoker in Gajok.  Old Believers settled in the wood area on the right bank of the river Daugava (now the Daugavpils district – Gajok) long time ago. When in 1883 the law that allowed Old Believers to build their chapels without external signs of the cult was passed, the merchant Kondratij Molchanov donated some his land for the prayer house building. Ivan Molchanov, his son, worked on that case. He had to go with the petitions to the provincial city Vitebsk and even to St. Petersburg. In 1884, the permission for the building was obtained. The church was built on the money that was donated by citizens; they were merchant G.Vasilev, families Astratov, Kapustin, Trifonov and others. Kondratij Molchanov donated money for the icons and for the church plate.

On March 30 in 1886 the church was consecrated. The project of the church has remained. It was a well made and elegant one-story stone building with a gable roof with a vestibule and with a square hall in the plan. The eastern and western parts of the building were marked with risalits with pediments on the south and north facades. The walls were crowned with an arched frieze. The building did not have signs of the cult. This part of the chapel remained without any modifications till nowadays.

20 years later, in 1906, after the proclamation of the directive “On the strengthening of the tolerance sources”, a temporary wooden bell tower for 5 bells was added to the church and a small head was placed on the roof. By Easter in 1907, a new brick bell tower had been built, it had two octagonals on a high tchetverik, a large cupola and decorations in a shape of corbel arches. The architecture of the bell tower was masterfully linked with the shapes of the former chapel. The church was one of the most beautiful religious buildings in Daugavpils. The hand of a professional is clearly seen in the architectural shapes of the church. The prototype of the stone bell tower in Gajok, as well as the prototype of the high bell tower of Riga church of Grebenshchikov community can be seen in the famous Ivan the Great of the Kremlin in Moscow. It is interesting that Riga bell tower was built a year earlier, in 1906, according to the project of the architect Alexander Schmeling. The bell tower in Gajok is smaller in scale, but the forms of the two bell towers are quite similar, as if they are “made in the same handwriting.” It is possible to assume the authorship of the well-known Riga architect in this case.

The WWI broke out. In 1915 the bells and church plate were evacuated to Russia. In 1922 the church was greatly damaged by the floods. The parishioners remembered about the lost bells when they began to rebuild the church. In 1929, a meeting was held between two communities from Gajok and from Old Fortstadt, where it was agreed to send delegates to Soviet Russia to search for the evacuated property. The Soviet government contributed to the search. Authorized K.Volosov and D.Hutelionok found the church plate of the church (according to different sources – in Vladimir province of town Gorohovec or in town Krasnij). They managed to get other bells instead of the lost ones, among them there was a bell poured in 1756 for the church of the Three Saints that is located at the Red Gate in Moscow, this large bell weights 64 poods and 30 pounds (tons). The returned bells and the church plate were consecrated on April 26 in 1929.

In 1941, during the Germans invasion the church burned down. Only a few books and icons were saved. The divine services continued in the remained house near the church. In 1947, the church was rebuilt again.

The interior of the church is traditional. The hall of the chapel is overlapped with a wooden arch that is inscribed in the structure of the roof. There are choirs in the western part. The three-storey iconostasis is made up of a number of different icons.