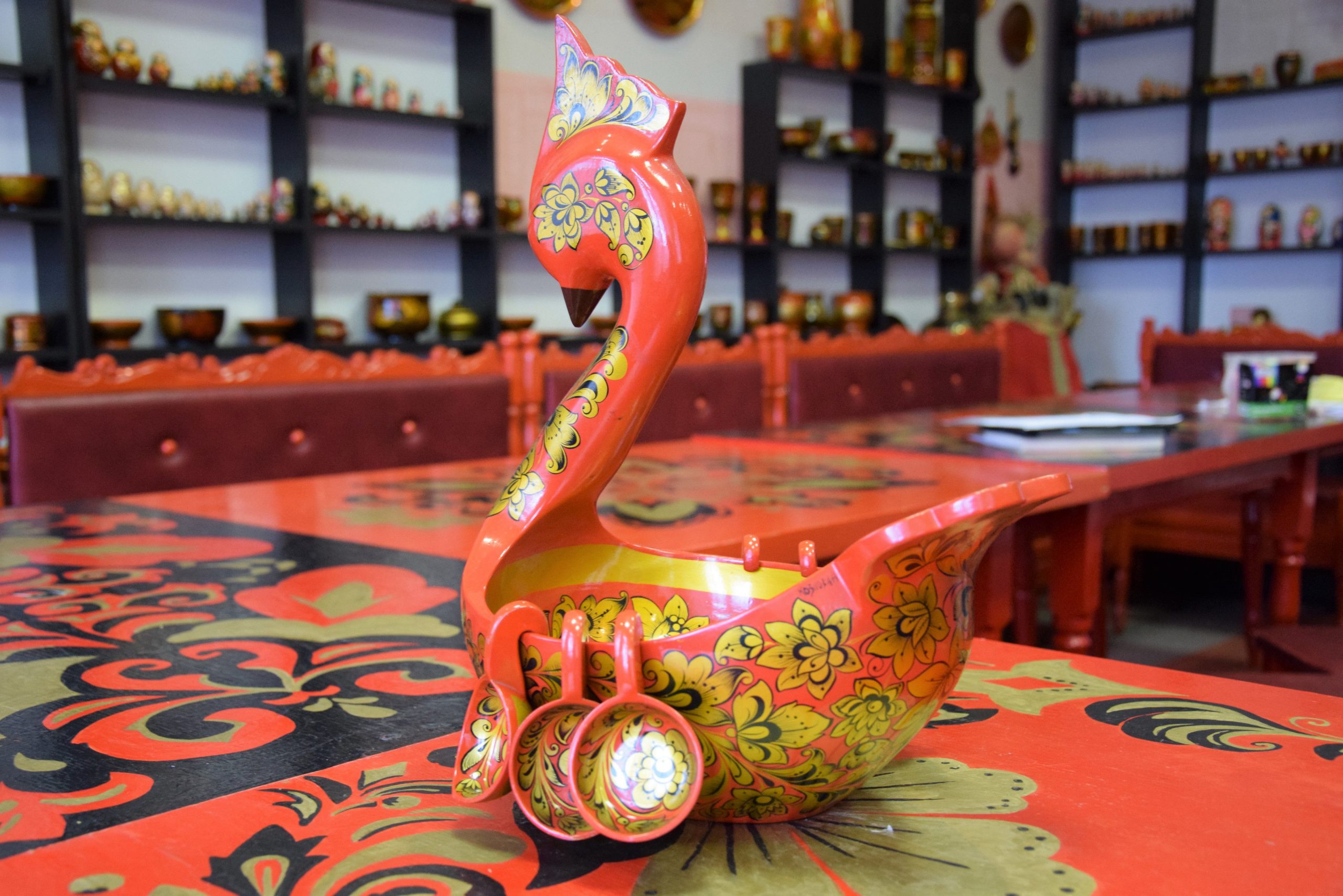 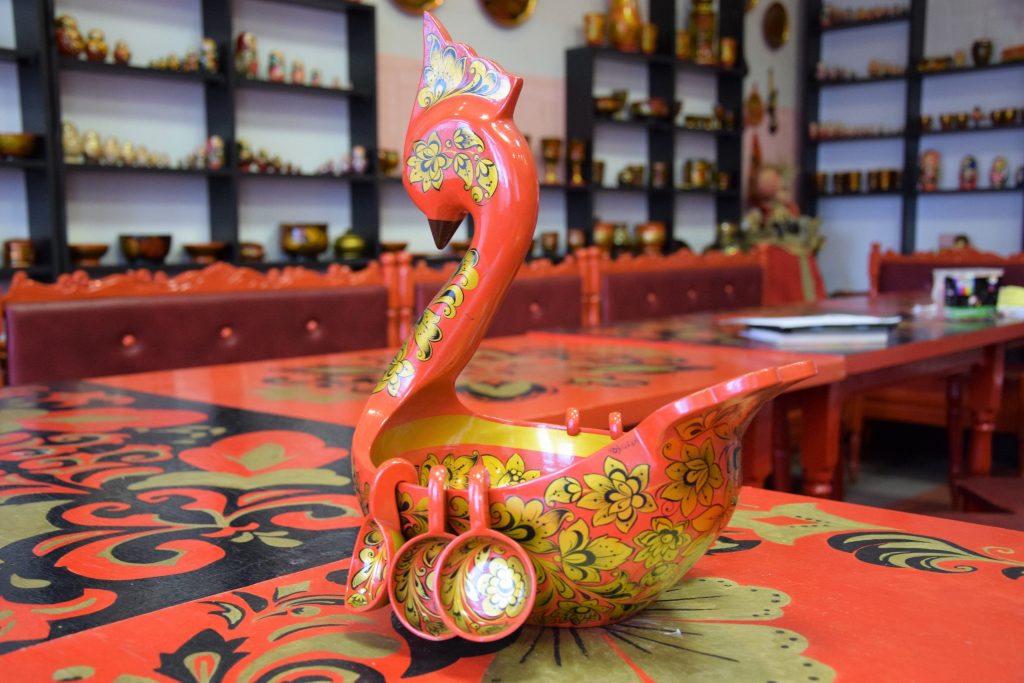 Gzhel front room
The exhibition familiarizes with one of the oldest Russian folk art, which became a unique artistic phenomenon, Gzhel ceramics. Gzhel is an ancient pottery district of Moscow region.
The date, when the manufacture of ceramics began there, is unknown. But one of the thirty villages, that gave the name to the whole district, was first mentioned in 1328 in the testament of the Moscow Prince Ivan Kalita.
In the history of Gzhel, as a center of national pottery, there were three stages of development. The first one relates to the production of majolica in the second half of the 18th century. The fashionable at the time majolica dish was produced by Gzehl masters in small home workshops. The products of colored clay with a thick porous crock were covered with opaque white enamel, on which “in the raw way” they made the multi-colored painting with enamel paints. This technique required high skills of drawing and painting. At the turn of 18th – 19th century majolica was crowd out by the fashionable blue-white English faience. Creative potters created the unique new transition material in the history of world ceramics – halffaience. The products of halffaience had a light gray crock and were covered with a transparent colorless glaze. The painting on them was  underglaze and overglaze, but it was drawn only by a cobalt, with  blue paint on a white background.

Reaching the authentic artistic heights in the manufacture of halffaience dish, Gzhel masters started to produce fine faience. Not only did Gzehl masters master the new material, but they created a distinctive style of faience products. It was clearly seen in the shape of dish, decoration, that combined plastic and painting techniques, story and ornamental painting. The production of faience products not only brought Gzhel to the path of the art industry but also made this district of Moscow an internationally recognized centre of Russian folk ceramic art. Halffaience and fine faience is the second stage in the development of Gzhel. The third stage began in the second half of the 20th century, when the art craft was revived. In the development of a new, modern style of Gzhel ceramic, the principle of combining of a white background with blue painting was taken as a basis, that existed at the beginning of the 19th century on the products of halffaience, but the inherited from the predecessor technology has undergone significant changes: a different material – porcelain – was used, as well as new ceramic paints. The collection of Gzhel ceramics, that Daugavpils Russian Cultural center can boast of, is considered to be one of the best in Latvia. It mainly consists of modern porcelain products of Gzhel masters. Among numerous exhibits demonstrated in the exhibition in Russian House, you can see amazingly beautiful kumgans and kvasniks, dishes and jugs, winebowls and cups, vases and sets, watches and a variety of figures of people and animals.

Hohloma chamber
Hohloma chamber was opened in February 2005. This is one of the most interesting and originally decorated exhibition halls of Russian House. A small, but very cozy room styled under Russian izba, but all the furniture is painted with Hohloma patterns. The colorful scarves, imported from different regions of Russia, bright Russian dolls and copper samovars add up to the unique colour to the interior. But the chief ornament of the chamber is the collection of original Russian Hohloma. Hohloma is a bright, original phenomenon of Russian folk decorative art. This traditional art craft can boast of its more than three hundred year history. It emerged in the second half of the 17th century in Zavolzje of Nizny Novgorod near the shopping village Hohloma, from which it took its name. The forest edge of Zavolzje had long been famous for its wonderful wood-carvers, but local masters of painting, among which were famous icon painters, invented a unique way of painting of wood products, that imitated gilding.

Hohloma products are popular all over the world. They attract, first of all, with their original coloring. The traditional pattern of climber plants and flowers, festive elegant color of painting, that is based on a combination of red, black and gold, giving the real jewel to Hohloma. Hohloma products, glittering with gold and splendor of varnishes, pleasant with colorful, poetic painting, became the subject of collecting long time ago. The collection of Daugavpils Russian Cultural center, which has been collected for ten years, is considered to be one of the best in Latvia. It includes a variety of items – decorative vases, plates and ladles, spoons, salt shakers, sets of dishes for fish soup, honey, berries and kvass, and also multi-disciplinary sets intended for the holiday table. Hohloma chamber is not only an exhibition hall, but also an original cafe. Here, the employees of Russian Cultural center receive numerous guests, who are necessarily entertained with pancakes and fragrant tea. Children’s events, lectures on folk art for pupils, friend ‘gatherings’ and other interesting events take place there. In addition, chamber is a wonderful place for original presentations, small banquets and corporate parties.

Orthodoxy in Latvia
In one of the exhibition halls of  Russian House there is an exhibition “Orthodoxy in Latvia. Origins and Modernity”. Its main adornment is the unique collection of ancient icons that Daugavpils Russian Culture center received as a gift in 2005. Prayer books and church utensils, as well as archival documents and modern publications on the history and traditions of the Orthodox Church complete the collection. In addition, in the Center of Russian Culture there is an extensive collection of historical materials, which show that Orthodoxy in our country has deeper roots than it is commonly believed.

According to historians, the first Christian church that was built on the territory of modern Latvia, was Orthodox. It was built in the valley of the river Daugava presumably for a century – a century and a half before the Northern Crusades of the 13th century. In those days, there were several large fiefdoms – Jersika, Koknese and Talava. The rulers of these principalities, having decided to spread Christianity in their lands, adopted Orthodoxy from the Russian people. In “Chronicle of Livonia” it is said that already in the 12th century Jersika and Koknese were not only fortified castles, but cities with many houses and Orthodox churches. The divine services in the temples were organized by both Russian and Latgalian priests. The memory about it has remained in the Latvian language. Many of the words associated with Christianity – “icon shelf” (baznīca), “cross” (krusts), “holy” (svēts), “candle” (svece), “fast” (postenis), “sin” (grēks) and others were borrowed by Latvians from the Russian language.

Old Belief in Latvia
In the ancient handwritten book “Chronicler Degutskij” it is stated that the first Old Believers, who did not accept the church reforms of Patriarch Nikon and therefore were persecuted in their motherland, appeared in the vicinity of Dinaburg in 1659. Most of them settled on the left bank of the river Daugava in the village of Liginishki, where in the summer of 1660, the first Old Believer’s church on the territory of Latvia was built. Since then, more than three centuries has passed. All this time, the descendants of the Old Believers settlers have carefully preserved their “old faith”, distinct culture, language, traditions and customs, crafts and artistic trades. They built temples decorated with unique iconostases, created religious communities, which became significant spiritual and cultural centers. The study of the history and culture of Old Believer community in our country is one of the main activities of Daugavpils Russian Cultural center. In ten years, the staff of the center was able to collect a lot of archival documents, exhibits and other materials on this topic. On their basis, the permanent exhibition “The spiritual and material culture of Old Belief in Latvia” is created in Russian house. In the extensive exhibition there are ancient and modern icons, unique samples of writing on the basis of which in these days the lists of ancient icons are written down, church clothes and utensils (censers, candlesticks, hand assistant, leaflets etc.), old manuscripts and printed prayer books, modern publications (calendars, journals, educational literature, historical and cultural studies). The exhibition also introduces the daily life of Old Believers. There are demonstrations of various household items: clothes (children’s “dresses”, hand-embroidered shirts, dresses etc.), household utensils (dishes, embroidered towels, wooden mortar, spinning wheel, antique irons) and other items of the household use, that reflect the deep traditionality of artistic samples of folk decorative and applied art.

Russian House is available to visitors by appointment only!