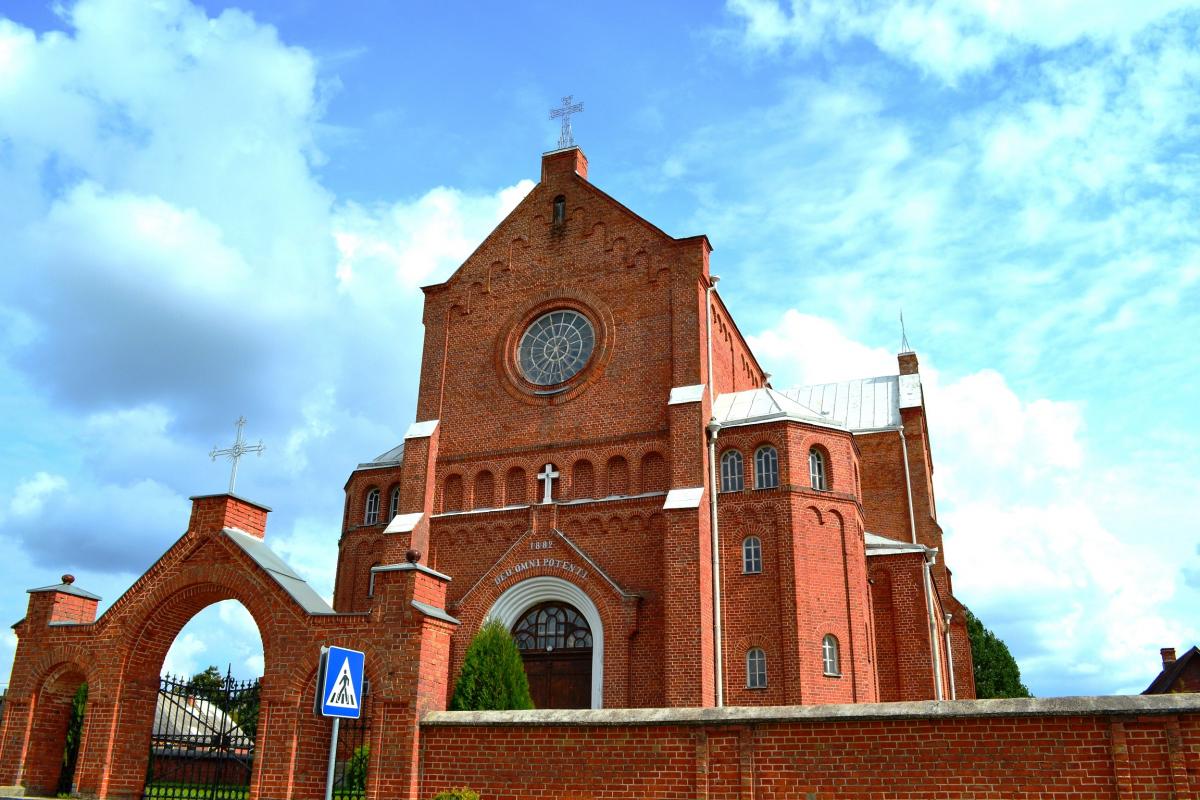 In Northern part of Daugavpils, on Nicgale-Spogi and Vabole-Upmala crossroads the attention of the tourists there is attracted by Kalupe Sacrament Roman Catholic Church of the Holy Altar built of red bricks. First Kalupe church was built of pine tree beams in 1785. This church was built by the Count of Liksna – J.Zyberk, with the help of master Sidlovskis. Wooden church has two gazeboes and it was 19.2m long and 8.1m wide. The church served inhabitants of Kalupe for 97 years. After the demolition of the church in its place there was located a cross that still nowadays stands in pine stand of the former manor. In 1861 was laid the foundation of the new stone Kalupe church. Means for church building were given by parish, Count, and dean S.Beinarovics. Political events delayed the process of building for 20 years. In 1882 the church was built and dean S.Beinarovics consecrated it. This event is perpetuated in facade of the church: “1882. Deo omni potenti”. In 1896 the church was consecrated by Mahilyow dean Albins Simons.
The church is built of red bricks, it has no towers and is 34.4m long and 19.2m wide. Above the facade rises iron cross. The building has shape of cross, has tin plated roof, wooden ceiling and stone-tiled floor. In 1913 its walls were artistically painted.
The church has three wooden altars with numerous figures of the Saints. In the middle of the main altar there is the statue of Christ with a ciborium in His hand, on sides there are statues of St.Teresa and St.Stanislaus, near the God table on the right side there is a statue of St.Francis. On right side altar there is a statue of Our Lady of Lourdes, on left altar – a statue of St.Michael Archangel. These statues were bought in Paris in 1928. On the walls of the church there are plates of black marble with memorial inscriptions of Zyberk on them. The church has three bells. One of them has 400kg in weight, other two are smaller and lighter. Around the Church garden there is red-brick fence. In the garden was buried assassinated dean Klements Apss (1913 – 1990).