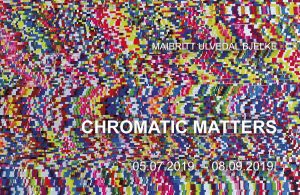 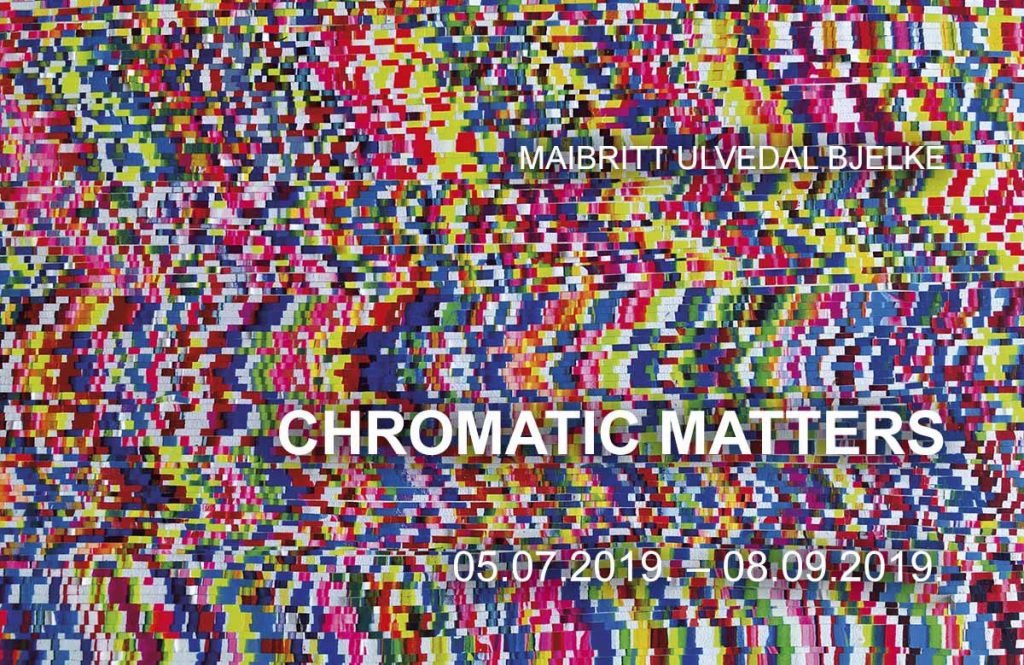 While Maibritt Ulvedal Bjelke’s art is all about painting, she has never been afraid – indeed rather eager in fact – to challenge her own medium of choice. The original dialogue she subtly introduces between the support, the canvas, and the actual “painted presence” (rather than a static given image) that is presented to the viewer, is both instantly seductive and intriguing for a good reason. The artist paints as a dancer dances, taking into her stride all the visible and invisible particulars, re-configurating the open space that she subtly demands for her art, by the way of determined moves and unexpected dynamics. With Maibritt, canvas surface, frame borders, paint strokes, drips, are deftly submitted to an unwritten law: that of the specific artwork in the make, in which they all are to play an equivalent active role, and more and more in volume, though without eclipsing the core of their identity: paintings. Paintings in architecture, paintings spreading in space, kinetic surfaces, series and groups of wall size works, series of “cubic paintings”, they all convey the genius of a common basic practise that has progressively, and gloriously, emancipated itself from its original prerequisites.

Arrived in Paris at an early stage of her career, the artist discovered its Supports-Surfaces group whose protagonists aimed at an art that encompassed external materials, and freed the painted canvas from the frame, thus challenging the supremacy of the delimited image. Maibritt had, even before that, been deeply impressed by the American Abstract Expressionists’ breakthroughs as regarded the relation between paint and canvas, canvas and frame, painting as a finished object, among whom Mark Rothko who was to remain a lasting inspiration. Maibritt felt a particular kinship with Rothko and started a series of works whose painterly dialogue of two great horizontal clouds of colour defined a painting that was visually eschewing its surface limitations. With ser-pen-tin, 2000 and dark-bleu-turquoise, 1996, both present in the present exhibition, the artist definitely rendered a referential homage to Mark Rothko while imposing in her works a definitely different interaction between motif and surface. In both instances her deliberately huge blotches of colour are so to speak riding a very rough terrain, subjected to a canvas horizontally split in two, drips of colour defying the logic of a sole and only position in space … there is no meditative serenity as in Rothko ‘s paintings but rather a painter’s “ring” where shots are coming from different perspectives… The canvas presents itself more as a fighting field, where all elements are trying to make their way… multidirectional drips of colours defy the idea of a one-dimensional experience.

In a different vocabulary but no less efficiently the more recent series of colour-galore and static-romance and chroma-flirt also defy a one-dimensional approach to them. All prerequisites are here definitely challenged by the artist. The artist reconstructs, and covers, here the surface of the support, by the infinitely patient and meticulous building of a kinetic image made or the “weaving” of multiple coloured units. A deftly constructed surface that presents sizzling shapes that visually vibrate, and that wraps itself over the sides of what has become as much of an art object as a painting. That “object” can indeed take on a cubic form but also extend to an architectural size, especially when joined by similar works of wall dimensions. The static-romance series that had started its emancipation from the mere surface has developed into an architectural entity without loosing its artistic identity.

Maibritt Ulvedal Bjelke has deftly taken the grand modern tradition of painting by storm and thus created an exquisite and original development of most of its attributes while adding a spice of her own. Her colours and shapes, and their subtle interplay, have a direct emotional impact. Maibritt creates as she lives. And she does live and paint with depth and brio.

Art historian and critic, director of the Renault Art Collection