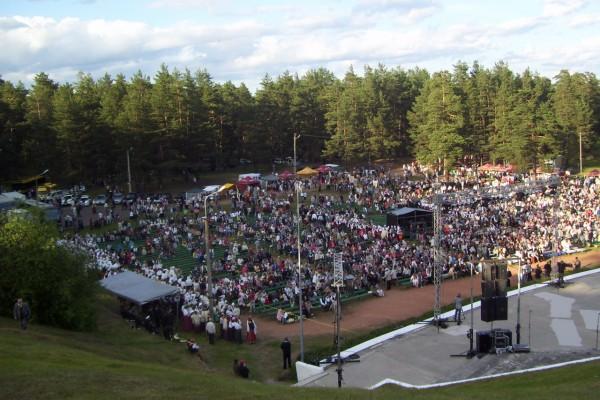 The stage in Stropi is the cultural-historical complex, situated in a scenic place with interesting relief and is the place for carrying out big folklore events, song festivals and performances. It is significant that on June 15 and 16 in 1940, Latgalian Song Festival took place at Daugavpils Stropi stage, with 8000 participants and 50 000 listeners from all over Latvia and it was the last Latvian Song Festival of independent Latvia. Historically, it closes a cycle of nine-Latvian common Song Festival bend and the independent Latvian song festival tradition – on June 14, at night, the border incidents took already place, all of a sudden the participation of the President Ulmanis in Song Festival was postponed and the people could only listen to the radio his congratulatory speech. When the choirs went away, Soviet troops flowed to Latvian territory. No matter how tragic it may sound, we should remember that Latvian songs have always been associated with its land and the fate of the nation.
﻿