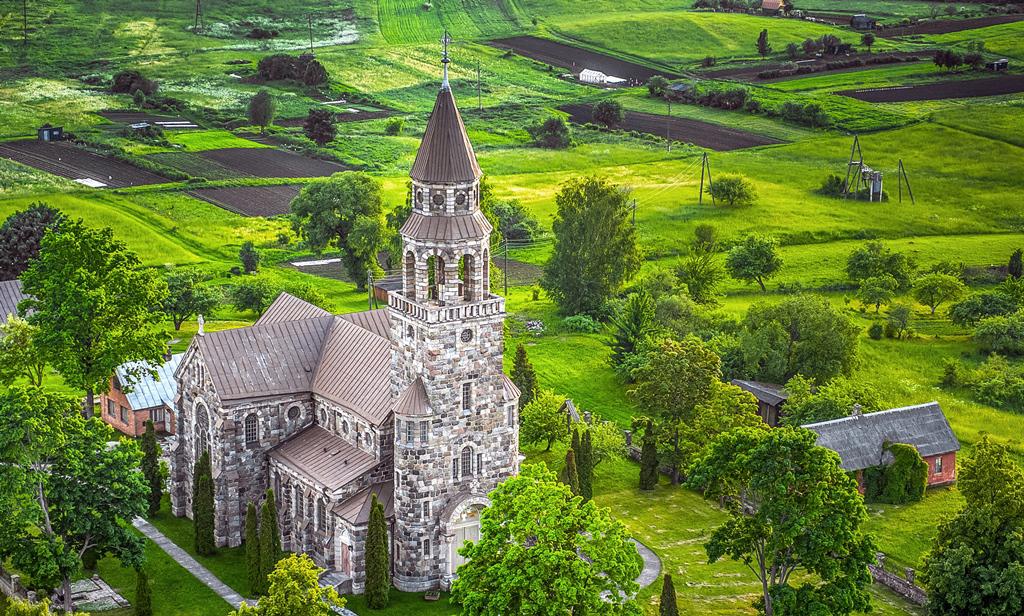 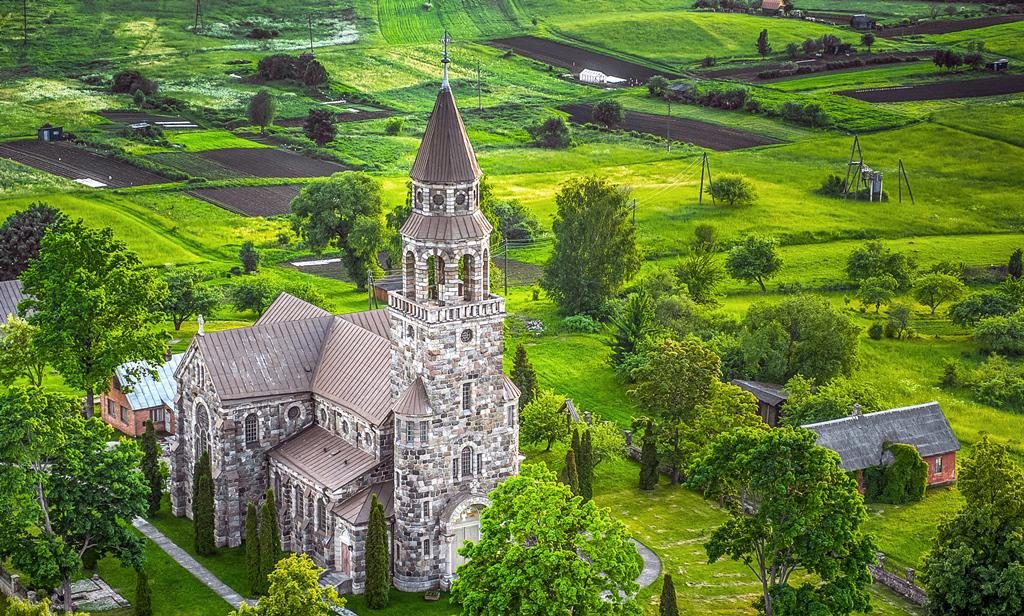 Roman Catholic Church of St. John the Baptist in Viski was built in period 1908 – 1925. It is significant national landmark, one of the few sacral buildings in Daugavpils region that was built of abated stones and belongs to one-tower basilica crucifix church type.

History of the church:
First church in Viski was built in 1621 from oaken logs in honour of St. John the Baptist. It was built by landlords Andrejs and Elizabete Mols outside Viski village, in cemetery. In 1625 was established Viski parish. This church serviced to the parish for 94 years. In 1715 at the expenses of Heronims and Katrina Mols the church was demolished and rebuilt near to Viski, on peninsula of the lake. This church serviced to the parish for 224 years. It was 410m³ big. Old Viski Church attracted the attention of professor Vipers and doctor A.Krumins as original landmark. The church was built of oaken logs, it had stone corner posts. From the outside it was planked horizontally. In front of the church there was a portico with 4 massive stone columns. Windows were only above the entrance door and in pediment. The church had almost rectangle form. Choral rooms (gallery) were propped on thin wooden columns all around the church with widening near the entrance and altar. In 1891 on Easter upon Viski Church fell misfortune. As in choral rooms assembled a lot of people, thin and rotten columns, on which the rooms were propped, broke off. Ceiling with gallery caved in into the hall (in church). It took several lives and several people were mangled up for ever. In 1894 caved in ceiling was repaired and instead of broken columns were built stone columns. After this incident in 2 August 1907 curia of archbishop of Mogilev in Peterpils asked the governor to give the permission to build new stone church in Viski.
In 1908 dean B.Verzbickis started to build new church not in place of the old one, but outside the village of Viski. The church was built according to construction plan of Liepaja architect Standmanis. It is built of abated stones and belongs to one-tower basilica crucifix church type. In period from 1908 until 1915 dean B.Verzbickis at the expenses of parish members and Leticija Mole built a church and roofed it. Unfinished remained interior works.
In 1918 the dean of Viski parish became J.Livcans. He did interior works in the church: laid a floor, ceiling, did plastering, put temporary altar and in 1925 started to hold services in new stone church. In 1930 were finished main interior works. In 1935 he purchased bell at weight 673kg. In 1936 the dean of Viski became A.Skromans. In his time were purchased two girandoles, the flag of Virgin Mary, installed electricity, was built priest’s house and company of Riga Kolbe set up new organ. Organ was consecrated by professor A.Novickis. A sermon was delivered by dean of Augškalne A.Misjuns. In 27 June 1939 Višķi Church was stricken by lightning. The fire was extinguished by Viski and Daugavpils firefighters. The tile roof of the church was destroyed and inner furnishing and equipment were damaged. The church suffered damages at the rate of about 20 000 lats. In period from 1966 till 1972 dean E.Klavcans repaired the tower and its roof, purchased new benches, put windows, moved temporary altar aside and arranged there the altar of St. John, tided away big altar and coloured the church. In the right side of the church there was black oaken altar that was transported from Dubna.
In 1937 old wooden church in Viski was demolished. It was transported to Valmiera and was put up anew. So the church was rebuilt for third time. Now there are made essential changes. In place of the old church there still are cellars where is located crypt of landlords Mols. Near the church were buried deans F.Sandra and J.Kesmins. Near the new stone church was buried dean S.Litaunieks. Some say that in Viski had lived four priests. It’s a pity that they do not mention time and year of this fact. Once dean B.Verzbickis narrated that in Middle Ages in Viski there was bishop’s church. This fact is confirmed by a document (1310) which says that in Latgale there had been its own diocese and it was situated between Kalupe and Viski. It’s name in documents is mentioned as “epixopatus Versowensis” and diocese “Columniensis”. According to the document some think that bishop’s cathedral was located in Viski.