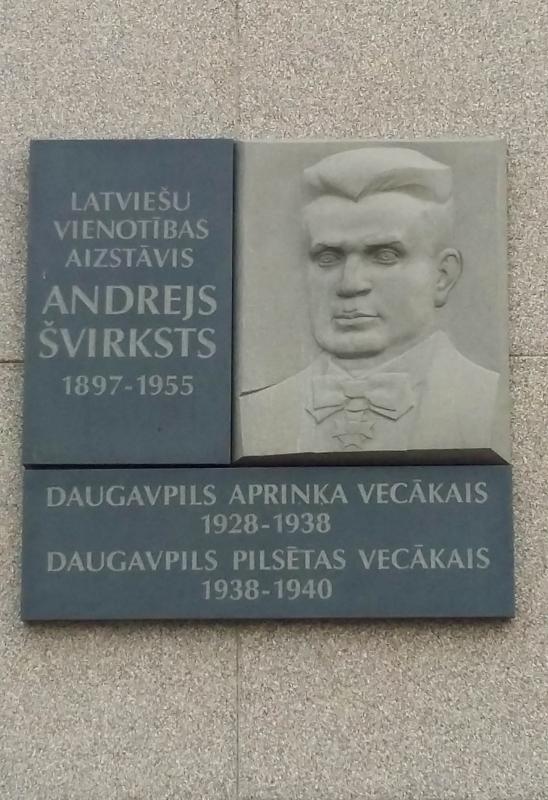 Andrejs Shvirksts was born in Shlosbergi house, Jersika parish, Daugavpils district. In year of 1915 he graduated from Livenhof (Livani) city school. After the graduation A. Shvirksts worked in the railway service, in 1917 he was one of the organizers of Latvian Riflemen’s Latgalian regiment. In 1919 he finished teacher training courses and worked as a teacher in schools of Livenhof parish.

Since the year of 1920 Andrejs Shvirksts worked in Daugavpils district’s administration, since 1928 till 1937 he was the chairman of the Daugavpils city administration, taking over the post from his predecessor, the Minister of People’s Welfare Jānis Volonts. During these two years, a lot was accomplished in the economic and cultural life of the city: a House of Unity, the first modern multifunctional building of its kind in the Baltics, was completed, a new bandstand was built in the Stropi woods, city streets were expanded, and a Daugavpils branch of the State Historical Museum was opened. Shvirksts contributed much to the construction of many rural schools in Daugavpils district – in Jersika, Sutras, Indra, Daugaviesi, Piedruja, Kalniesi.

A. Shvirksts actively participated in the activities of the association of the old Latvian Riflemen, in the Latvian Red Cross, in Daugavpils branch of Latvian Children’s Aid Union, in Daugavpils branch of Health Promotion Society, Daugavpils fire fighters’ society, etc. He was also the Chairman of the Association of Latvians of Daugavpils. A. Shvirksts was awarded with the Order of Three Stars, the Lacplasis Military Order and the Order of Viesturs.
In 1940, A. Shvirksts was the Chairman of the Latgalian Song Festival organizing committee. This splendid event was held on June the 16th, and became the painful epilogue to the Latvian state, as well as to the Andrejs Shvirkst’s work dedicated to the prosperity of Latgale: the next day the Soviet tanks came into Daugavpils, following the road along the Stropi bandstand.

On the June 14th, 1941, A. Shvirksts was arrested and exiled to Siberia, on the 17th of November in Vyatlag (Vyatka forced labour camp) he was sentenced to death, but a year later, on 16 December 1942, NKVD sentenced A. Shvirksts to serve 10 years in prison. After serving the sentence, he was forbidden to return to Latvia. A. Shvirksts died on October the 3rd, 1955, in Gorky region’s Kstovo district’s village of Pochinki, and was buried in a foreign land. On 17th of November, 2011, a memorial plaque dedicated to the Andrejs  Shvirksts was unveiled on the wall of the House of Unity in Daugavpils. The plaque was designed by the sculptor Ivo Folkmanis.