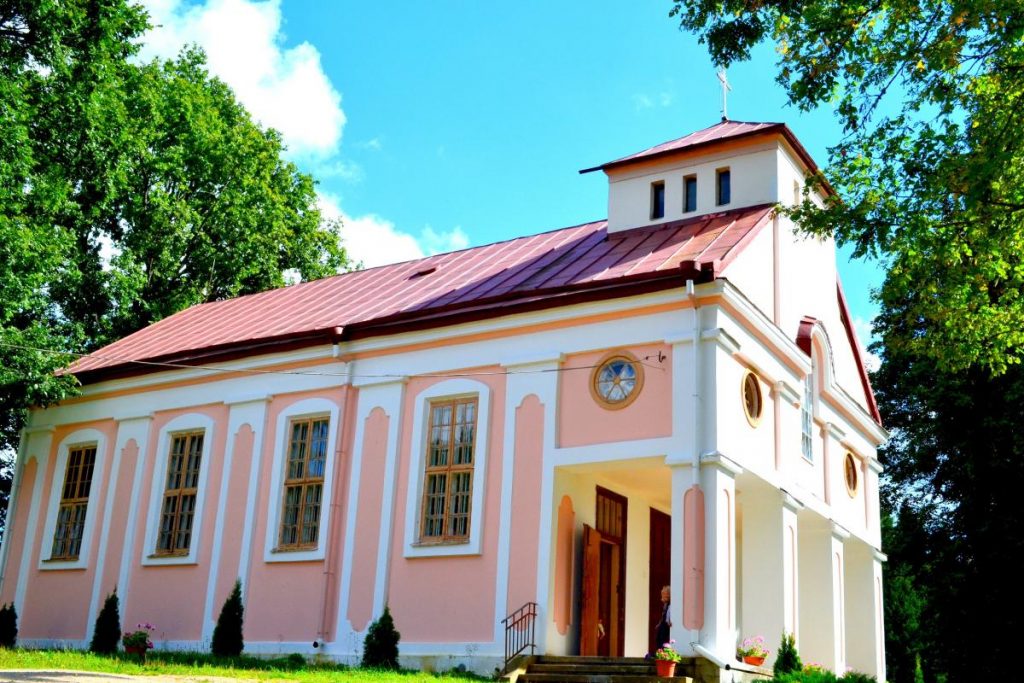 The church was built in the period from 1933 till 1935 according to the project of architect Pavlov under the supervision of J. Klonis at the expenses of the parish.

History of the church:
Catholics from surroundings of Medumi went to Smelina. There was old wooden church that was rebuilt in 1854. After World War I the church left in Lithuania. After border’s closing visitors of the church every time had to go through pass formalities. It caused great inconvenience. Therefore deans who lived in Griva already since 1922 went to Medumi to conduct the services. Services were held in house of Catholic host Jazeps Gabrans. The house was big and was situated 2km from the centre of Medumi. In 1928 in Medumi parish there were approximately 1000 members and it was considered as an affiliate of Griva. In 1931 for the needs of Medumi Church were assigned 16 hectares of the land. It was measured out from national foundation by surveyor Mikelans in uninhabited area, in mound, overgrown with bushes. There also was offered another choice, closer to Medumi centre, where now is located Old-Believers’ Church. As for head of the parish Azarevičs the mould was 2km closer than the centre, he chose overgrown mould. Also Griva dean J.Plonis, who managed Medumi Church affairs, agreed with him. After the assignment of the land dean J.Plonis started to build the church. The plan was worked out by architect Pavlovs. Parish members already since 1932 were collecting means for the church’s building: organized lotteries, “lucky-dip”, social gatherings, etc. From other churches inhabitants of Medumi didn’t receive any help. With the permission of bishop J.Rancāns the foundation of Medumi Church was consecrated by dean J.Plonis in 24 June 1933, on the Day of John the Baptist. In celebration participated a lot of people. The church was built of concrete bricks. Work moved forward very successfully and already in 10 June 1935 the church was windowed, it had temporary roof and first services were held. In 1936 J.Kazenas was appointed the regular dean of Medumi parish (born in 1869, ordained in 1895). There was no a house of priest yet, that’s why dean lived in private house, not far from the church. In September of 1937 was started building of two-storey priest’s house. In the same year there were finished wooden decoration works of the church.
In 2 July 1939 bishop of Liepaja A.Urbss made canonical visitation to Medumi Church. He was accompanied by several clergymen and students of LU Roman Catholic theology faculty. After bishop’s visitation building works were continued too, but when World War II was started, they remained unfinished.
The church was 15m long, 10m wide and 7m high and it had 3m long and 10m wide porch propped on 4 concrete pillars. The area of the church was 100m² (without the presbytery and choral rooms). Unfinished gazebo was roofed and it had four-sided plate-tin terrace. According to the plan the gazebo had to have high spire. The church had 3 altars. Big altar was made of stone and above it there was big painting of John the Baptist in oaken frame. This Saint was also the patron of Medumi Church. On both sides of the presbytery there were small sacristies. On the right side there was altar of Christ the King with big bas-relief figurine. On the left side there was altar of Our Lady of Lourdes. The church had wooden floor and ceiling. Ceiling was plastered. There were choral rooms with harmonium of company “Bokum”. From the outside the church was plastered in 1969. There were 3 entrance doors in front part of the church and one – from the sacristy. In 1975 in the church was connected to the central heating system. Stopped works in Medumi Church were not continued till 1954, it was unattractive and in the building reigned poverty. When in 1954 authorized representative of religious affairs Resbergs visited Medumi Church, he was indignant and wondered: “Is it church or cattle-shed?” After that dean J.Gavracs plastered the church from the inside and started to decorate the church. Dean L.Lapkovskis from 1957 continued the started work and finished its building and its equipping with the necessary facilities. In the church there were relics of St. Modest that were approbated by bishop A.Urbss in 1938. Next to the church there was a chapel. It was consecrated with the permission of bishop Rancans by dean J.Plonis in 1933.