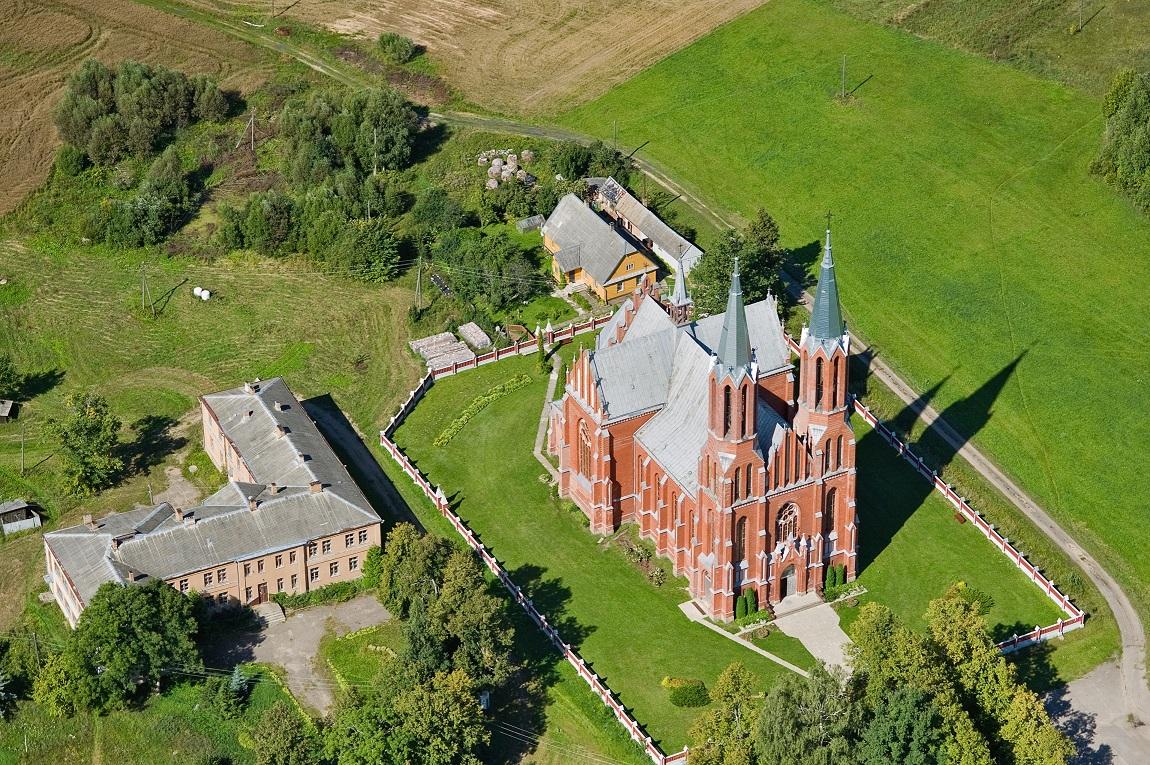 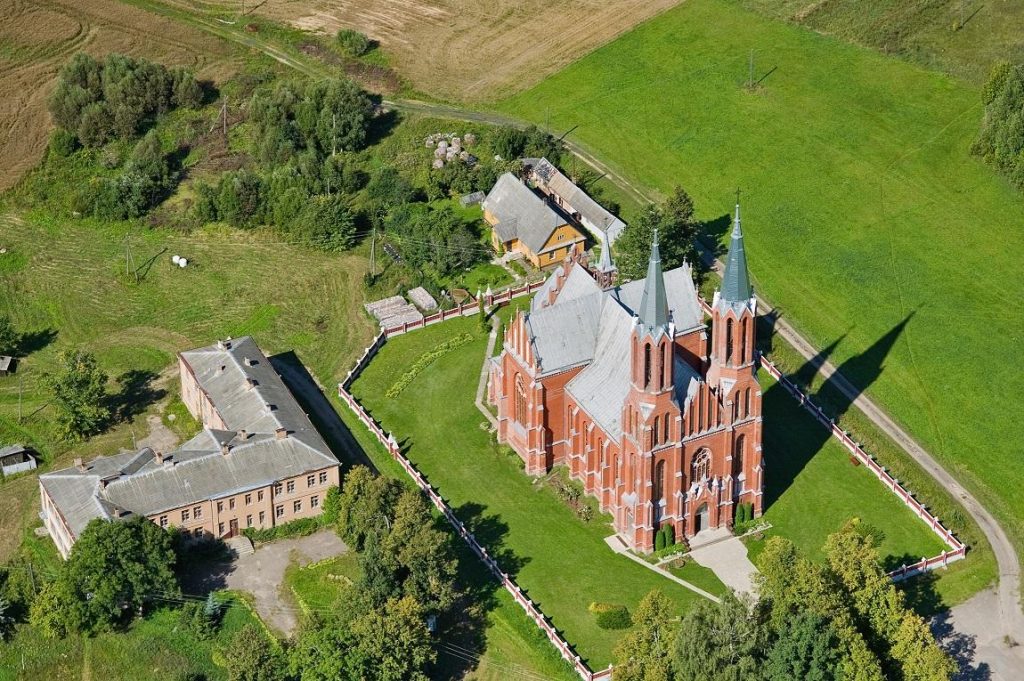 The building of Blessed Jesus’ Heart Roman Catholic Church in Liksna was finished in 1913. It was built in Neo-Gothic style. Its silhouette is the most important landscape dominant of Daugava valley in environs of Kosa Lake.

History of the church:
The history of Liksna Church has closely related with the activities of order of the Jesuits. When in 1621 the Swedes captured Riga they expelled the Jesuits. Bertulis Zyberk, who had properties in Ilukste, Dviete, Pilskalne, Dunava, Rubeni, Bebrene, Svente, Liksna, Nicgale and Kirupe, provided them shelter. Here, on both banks of Daugava, they did “re-Catholisation” works. In Liksna for a long time was located Jesuits’ mission that initially was subordinated to Ilukste residence, but later – to Daugavpils. Starting with 1635 Jesuits’ activities in properties of Zyberks became more active because in Ilukste haddied the last Lutheran pastor. Jan, son of count Zyberk, restored Ilukste Church to Catholics, but its care was trusted to Jesuits. King of Poland Wladyslaw IV confirmed its belonging to Catholics for ever and ever. In 1771 – 1772 in list of members of order of the Jesuits in Lithuanian province was mentioned that especially active in Liksna was father Mikelis Butovics. He had acted there for 17 years. When in 1783 was built Mogilev archdiocese, its first archbishop S.Siestzencevics in Liksna established Daugavpils (Lejas) deanery residence. Thereby in 1789 activities of the Jesuits in Liksna were over and its trusteeship was taken by temporal pastors. Some of Liksna deans were very famous and prominent. From 1826 till 1856 in Liksna lived canon Tomasz Kossakowski, the publisher of a number of books in Latvian. Later his work was continued by dean Tomass Kopecs. Especially prominent in Liksna was dean (later archbishop) A.Springovics (1905 – 1918).
First church in Liksna was built in 1748 in the yard of Liksna manor. It was built by Ludingshauzens-Volfs, the owners of the castle. It is unknown what materials were used for its building. The church didn’t survive till nowadays.
First church of Loksna parish was built of bricks in 1798 at the expenses of count Plater-Zyberk. It was consecrated by bishop Valerians Kamionka in 1819 in honour of the Holy Family. To judge from old photographs the church was quite big, it had two gazeboes, and was built in Baroque style. When this church was built the church in the yard of the castle was renamed to chapel.
In period from 1909 till 1913 deal (later archbishop) A.Springovics in Liksna built new stone church. In its facade there was inscribed the year of its building – “1912”. The church was brick Neo-Gothic style building and it was built nearer to the highway Riga – Daugavpils than the previous church. After the building was finished the old stone church was demolished and of its materials was built big two-storey pastorate house. The church was built at the expenses of parish members and landlords. In World War I the charge was damaged from artillery fire. In 15 October 1915 Liksna Church was fired by German light artillery for the first time. The damage was insignificant. In December it was fired already by the heavy artillery. Six shots that caught on the church did great damage: the wall was penetrated in three spots and the vault was broken in. In 9 February 1916 the church was fired by 8 inch artillery. A part of the presbytery and a gazebo were damaged, side walls were cracked. After the war in 20s the church was repaired.

Description of the church:
The church is a red brick building. Bricks were bought in Poland. The roof and the gazeboes were covered with galvanized plate-tin. Liksna Church is a 30m long and 17m wide Neo-Gothic building with tiled floor. On both sides of the entrance there were 2 symmetric gazeboes, the third one was small and built to retain architectonic style, and was situated above the presbytery. On gazeboes there were 3 bells: 1 – 609kg, 2 – 124kg, 3 – 62kg. Above the front doors there was big window, behind which was seen the statue of Jesus’ Heart. The floor in the church is made of cement tiles, and its ceiling – of stone vaults that were propped on 5 pairs of pillars. The walls are plastered up with lime but in junctions of edges there were left red bricks (i.e. created so-called cross vault). In the church there were 3 oaken Gothic style altars, oaken ambo and pictures of the Way of the Cross in plaster frames. On big altar there was the statue of Jesus’ Heart and paintings of the Saints on its sides. Liksna Church was also devoted to Blessed Jesus’ Heart. On the right side there was altar with the painting of St. Anthony, on the left side there was the altar of St. Asizes Franciska. On the sides, near the presbytery there were plaster statues of St.Anthony and St. Theresia. The presbytery was separated from the church by God table. On both sides of the presbytery there were big sacristies. On the left side there were doors, but on the right – Our Lady of Lourdes chapel with altar. On each side of the church there were 5 big windows (not stained-glass). Near the presbytery there were smaller windows that’s why there was a little bit dark. There were spacious choral rooms with big organ that was purchased in the time of J.Kalniss. The organ had very beautiful sounding. The church had all the necessary liturgical inventory. Around the church there was spacious garden. Around the garden there was high red brick fence built by dean J.Kalniss. In the garden was buried dean Pavils Vaiculonis (1867 – 1929). In memory of the demolished church in its place there was built stone chapel (approximately 1.5km from the new church). Now it is in very poor condition. Last time Liksna Church was coloured in 1964 with oil-colours, its ceiling was whitened. In the church there is electricity, but there is no heating. Only the presbytery is heated.
As time passed it appeared that bricks used for walls of the church were of low quality. They started to crumble, that’s why dean J.Kalniss in 1939 started to take them out gradually and exchanged them for new bricks. It was hard work, but he changed at least 60.000 bricks. As dean J.Kalniss lived in Liksna under 20 years, archbishop A.Springovics once sympathetically evaluated his work and said: “You and me have built Liksna Church”.