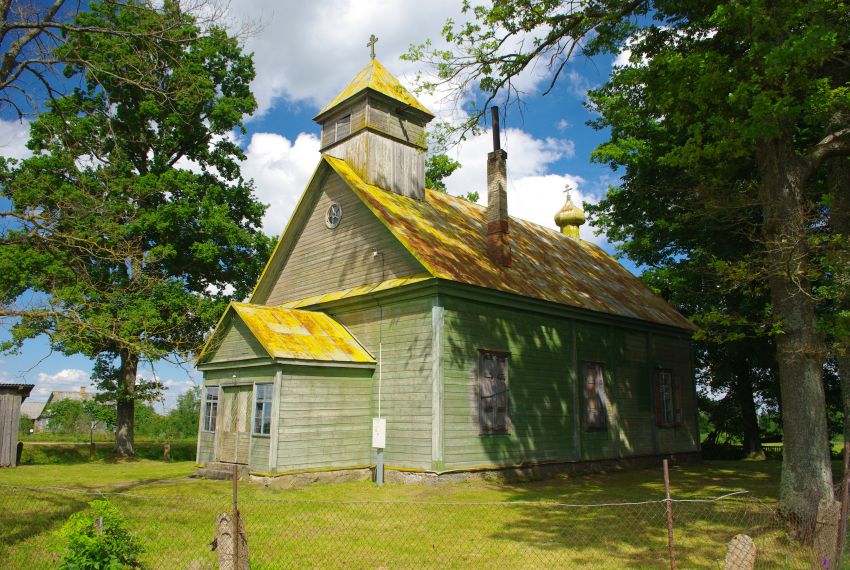 Old Believers community in Ascuki was founded in 1859. The present chapel was built in 1910 at the place of the former chapel. After the Direktive “On Toleration” in 1905, Old Believers were allowed to build religious buildings and to build up their cemeteries. Before WWI, several communities in Dvinsk region had time to update their churches, the chapel in Ascuki is among them. The building is simple in its shape: a rectangular prayer hall, a small vestibule, a covered tambour (probably it was rebuilt later) instead of a porch and a gable roof. The wooden blockhouse is covered with boards; the roof is covered with metal roofing with folds. The western facade is interesting because it is decorated with a small “rose” – a round window with the radial sashes. In Daugavpils region only Ascuki prayer house has such a window.
The tiered iconostasis has the icons that were created in 1830 – 1914. The ceiling is flat, with slight slants along the outer walls. The beautiful circular chandelier hangs in the center of the chapel; it is a real canonical horos. This chapel can be called a typical Old Believer’ chapel of this region with the original decoration. In Soviet times the chapel was an architectural monument.