1. Shmakovka Museum in Daugavpils
The largest museum dedicated to the Shmakovka drink in Latvia that offers a modern and attractive story about Latgale’s strong drink. The Shmakovka Museum is located in the historic building, named Unity House, in the heart of the city. It is possible to explore the process of making shmakovka in an interactive way and to see authentic and impressive production equipment. In addition, it is possible to become aware of the most important stages in Latgale’s history, along with the story of the creation of the drink. The exhibition also plays an educational role in informing about the consequences of alcohol consumption.
Visitors have access to free audio guides in 6 languages ​​- Latvian, Latgalian, Russian, English, Lithuanian and German. Moreover, it is possible to book guided tours in Latvian, Russian and English. Visitors are invited to buy various souvenirs, as well as to taste and buy shmakovka at the shop of the local farmer “Sēlija” in the museum. There is a special price for individual visitors (2.15 EUR) on the first Sunday of every month.
Address: 22a Rīgas Street (Rīgas iela 22a), Daugavpils
Contacts: +371 65422818; +371 26444810
Facebook , Instagram
www.smakovka.lv

2. Shmakovka Lab in Silene
Laboratory of Shmakovka in “Silene Resort&Spa” is a stylish and modern place with a classic and long-standing tradition of making a man-made regional drink. The local producer has developed several types of the drink, which are produced according to the individual recipe. Here you can get acquainted with the drink production process and the history of its preparation. It is also possible to order shmakovka degustation with a funny Latgalian consecration ritual, as well as to buy the drink. Here you can enjoy new tastes, experience unusual experiments and have fun.
Address: Skrudalienas Parish, Daugavpils District
Contacts: +371 62004100, +371 22013509
Facebook, Instagram
www.silene.lv

3. Latgale Culinary Heritage Centre in Krāslava
The association “Latgale Culinary Heritage Centre” was established in December 2013 in order to develop the Latgale culinary heritage network that currently unites more than 30 Latgale entrepreneurs and organisations. The association itself has found its home in Castle Complex of Counts Plāters. Here you can buy products made in Krāslava – honey, tea, linseed oil, hemp oil, home-baked bread, cottage cheese and others. It is possible to taste Latgalian dishes by prior agreement.
Address: 2 Pils Street (Pils iela 2), Krāslava
Contacts: +371 26395176; +371 29857557
Facebook
www.kulinaraismantojums.lv

4. Bread Museum in Aglona
The Bread Museum in Aglona is the only bread museum in Latvia that introduces visitors to the grain growing and bread making. The hostess Vija Kudiņa dressed in Latgalian folk costume welcomes every visitor of the museum. Vija has collected dozens of proverbs, beliefs, fairy tales, customs about growing cereals, baking and eating traditions. Guests can enjoy home-baked bread, try their hands at cutting the mill and holding a full-grain yard. Visitors can look at several hundreds of exhibits related to grain processing and bread baking. It is possible to order traditional Latgalian lunch, as well as to celebrate weddings here.
Address: 7 Daugavpils Street (Daugavpils iela 7), Aglona
Contacts: +37129287044
Facebook

5. Kandzas Museum – private collection in Kaunata
An exciting private collection about the beginnings and development of homemade strong drink in different countries has been created in the old pub building of Kaunata. There are lots of interesting exhibits and historical materials. The owner of the museum, Dace Zagorska, has many plans to continue collecting historical evidence of the traditions of making homemade potions. The museum has a large collection of glasses and every visitor can supplement it by an unusual glass sample. It is possible to taste shmakovka drink here.
Address: 45 Rēzeknes Street (Rēzeknes iela 45), Kaunata, Rēzekne District
Contacts: +37120203962
Facebook

6. Bykov Shmakouka Museum in Gaigalava
Shmakouka (šmakouka – local designation) Museum was opened in 2015 with the aim of preserving and promoting the shmakovka drink as a Latgale culinary heritage tradition. Here you can see various distillation devices collected in the local and more distant area, listen to the story of the owner Gunārs Igauņis about the process of making shmakovka, as well as taste different types of shmakovka. It is also possible to see the collection of musical instruments of Gunars Igaunis and get to know the musical traditions of Latgale.
Address: 2a Meža Street (Meža iela 2a), Gaigalava, Rēzekne District
Contacts: +371 28728790
Facebook

7. “Latgolys Šmakovka” in Malnava
The largest shmakovka distillery in Latvia. Here you can get real emotions, entertainment and a sense of community. All these emotions are provided by the attractive owner of distillery Jānis Krivtežs. Visitors can visit “Latgolys šmakovkys dadzynuotova” (brewery) and taste the drink during the tour, accompanied by a guide. In addition, it is possible to learn the secrets of Malnava Manor Park and take a look at World War II bunkers. There is an interactive program for guests of the wedding ceremony and an opportunity to make a gift for the young couple. It is possible to book a musical performance, theatre play and other entertainment.
Address: 11 Kļavu Street (Kļavu iela 11), Malnava
Contacts: +37128321856
Facebook, Instagram
www.latgalessmakovka.lv

The route was created in the framework of the project “Gastronomiskais tūrisma maršruts “Latgales šmakovkas ceļš”” that was approved by the Latgale Culture Programme 2020 project competition with the financial support of Latgale Region Development Agency, State Culture Capital Fund, “Latvian State Forests”. 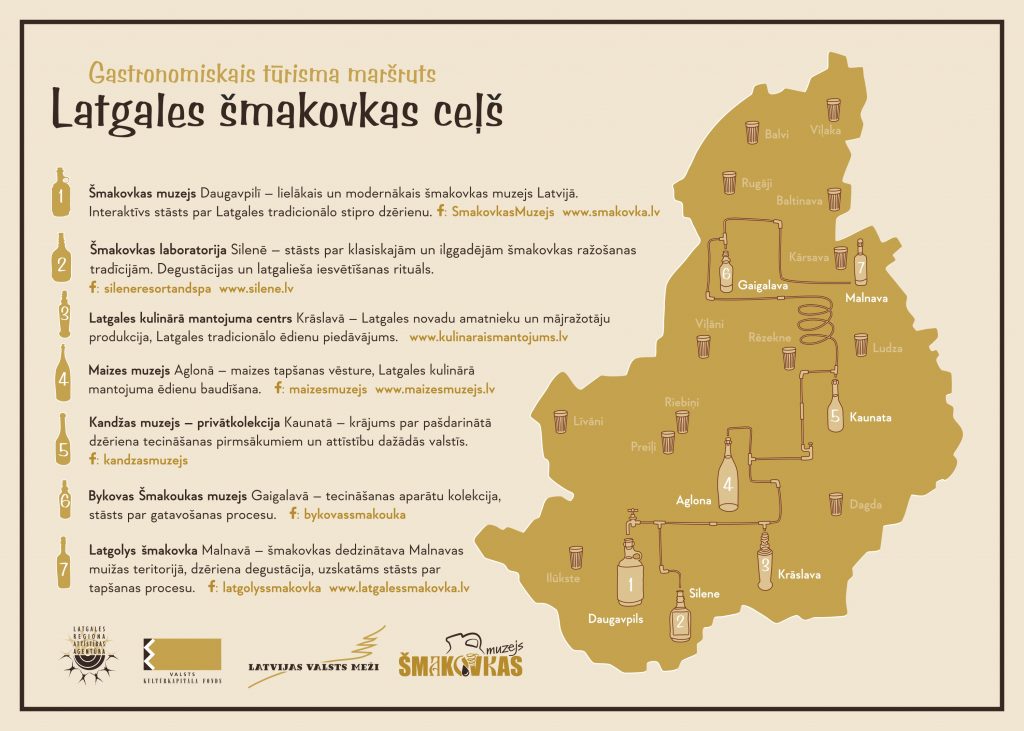