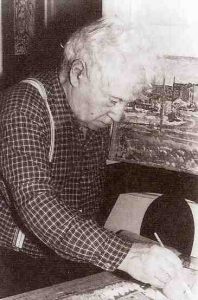 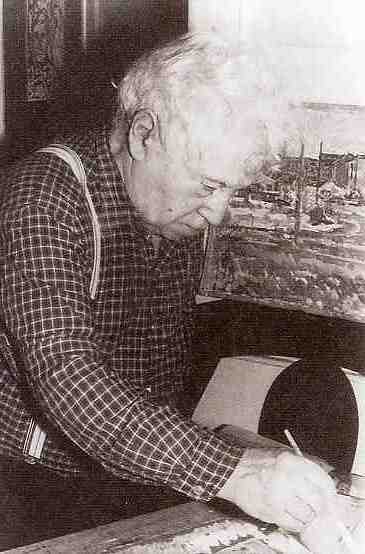 Painter (1906 – 1989). He was born in 1906 in Daugavpils. At the very beginning he studied at the Vitebsk Art School at Yuri Pena and Mark Shagal. In 1922 he moved to Petrograd, where he studied at the Institute of Arts under the guidance of Kazimir Malevich, and attended Pavel Filonov’s School of Analytical Art. The artist’s individual style was influenced by meeting Pavel Filonov, Kazimir Malevich, Rafael Falko and friendship with avant-garde poets Danilo Harms, Aleksandr Vvedensky and the music genius of the 20th century Dmitry Shostakovich. In the 1920s Gershov’s talent flourished, but in 1932 and later in 1948 he was arrested and deported to Vorkuta. After returning from exile in 1956, he lived and worked in Leningrad by the end of his life. His artistic style is characterised with the expression of colour and drawing, but the works reflect deep emotionality, and the author’s dramatic and sometimes ironical world view. His paintings reflect both the influence of fauvism and expressionism and primitivism. S. Gershov had diverse role models – eminent artists of various ages such as Rublev, Velazquez, Rembrandt, Cezanne, and Picasso.

The surrounding world and life experience were transformed into new images and stories and became an inspiration for painting compositions. At that time, he very often focused on ballet, theatre, music and literature related topics. Several art works or art work cycles are devoted to Shostakovich, Beethoven, and Michelangelo. S. Gershov often thought of philosophical questions such as life and death, good and evil. The freely painted portraits, landscapes, genre compositions characterize him as a great master of improvisation and expression.