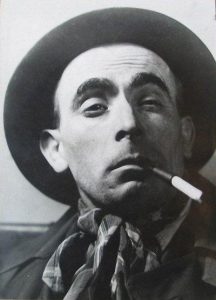 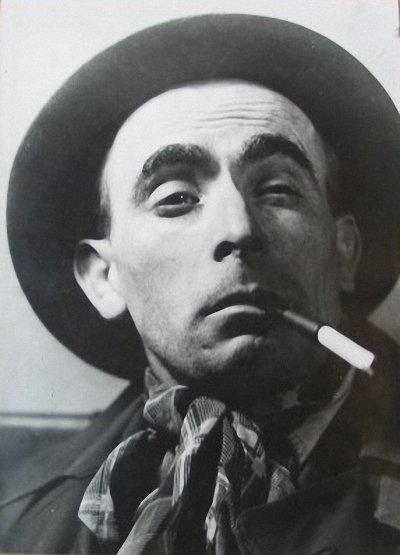 Pseudonym – Jacques Shapiro. Jacques Chapiro (1897-1972) was a painter. Yakov Chapiro was born on June 13, 1897 in Daugavpils, in the family of a woodcutter Abraham Chapiro. The boy got traditional Jewish religious education and began to learn the basics of art at the age of 10. In 1915, Yakov began his studies at the Kharkiv Art School in Ukraine and in 1918 continued his training at the School of Art in Kyiv. In 1919, Yakov led the drawing school in Ekaterinoslav (present Dnipropetrovsk). In 1920 he moved to Petrograd, where he led the children’s art school in parallel with art studies, worked as a decorator and theatre artist in the famous director V. Meierhold Theatre. In 1921, he moved to Moscow and, as a theatre artist, continued to collaborate with theaters directed by the director V. Meierhold and J.Vahtangova. Yakov Chapiro became famous and highly requested as a theatre artist. Companions remembers him as a hyperactive and extremely communicative man who quickly established friendship with others.

At the peak of his fame, Yakov Chapiro decided to radically change his life and, in 1925, moved to France. Yakov quickly spent his savings, but representatives of the Russian and Jewish artists living in emigration in France saved him from starvation. On their recommendation, Yakov Shapiro arrived at the Parisian Artists’ Colony “La Ruche”. This cylinder-shaped building was built from the World Exhibit construction remnants in 1902 by the sculptor Alfred Boucher in Montparnasse. Premises for a symbolic payment were rented to poor foreign artists. In the 1920s and 1930s the geniuses of the 20th century, such as M. Modigliani, P. Picasso, M. Chagall, H. Sutin and F. Leger, lived and worked in this community. All together they formed the so-called School of Paris – a group of French and emigrated artists who worked in Paris between the first years of the 20th century and the 1950s. Chapiro lived in this commune for 5 years (1925-1930) and created his best works there. He changed the name, and became known as Jacques Chapiro. The variety of artistic styles and forms characteristic to this time is also reflected in Chapiro’s art – cubism, fauvism, expressionism and impressionism. From 1926, his works were exhibited in such prestigious Paris art galleries and salons as Bonaparte’s Gallery, and Autumn Salon. In 1930 and 1936, personal exhibitions of the artist’s works took place in Paris. He got acquainted with the famous ballet impresario Sergey Diaghilev, and in the second half of the 20th century he created decorations for “Diaghilev Russian ballet” performances. Jacques Chapiro participated in the Jewish Artists’ Association, founded in 1937 in Paris. During this time, a series of paintings dedicated to the artist’s Jewish theme was appreciated by critics. In the 1930s, with the exacerbation of anti-Semitic moods and economic difficulties caused by the Great Depression, Jacques Chapiro’s life and activities in France became difficult. When The World War II started, Jacques Chapiro was forced to leave Paris and spent the time of German occupation in small France and Italy towns.

After the war, the painter returned to Paris and opened his own art studio. During this time, Jacques Shapiro created lithographs for D. Knuts poetry and wrote a memorial book for the artist’s colony “La Ruche”. This is the first eyewitness’s story, full of funny stories and interesting details about this unique cultural phenomenon. The book was published in 1960 and was praised by readers and critics. When in the 1960s the decision to demolish the “La Ruche” building was made, Jacques Chapiro, together with his associates, set up a Committee to achieve that the unique object was preserved and even included in the list of protected historical monuments.

In the post-war stage, Jacques Chapiro held personal exhibitions in Paris (1946, 1949) and London (1950). His works were exhibited at countless Russian art exhibitions.

Jacques Chapiro loved experimenting in art. He loved working in almost all art genres. He painted portraits, self-portraits, interiors, silent nature and landscapes. His paintings are so varied that it’s almost impossible to rank this artist in a particular style or direction. The painter managed to create his own unique art world with unusual shapes and vivid colours. His paintings are still at a high demand in art galleries and auctions. Jacques Chapiro works can be found at the National Museum of Modern Art in Paris, the Chicago Institute of Art, the Fine Arts Museum of A. Pushkin in Moscow, as well as in many private collections.

Born and raised in Daugavpils